Following the shocking shooting at Stoneman Douglas High School in Parkland, Florida, one man, Ben Dickmann, has come forward to police and gave them his A5-15 style gun.

Dickmann said that he came to the conclusion that no one, including him, needs that type of rifle.

Dickmann took to Facebook on Wednesday to say that he would be turning in his AR-57 rifle, which is a variation on the AR-15 rifle that has been chosen by several high profile mass shooters. He walked into the Sheriff’s Office in Broward County and handed the rifle over.

Friends took photos of Dickmann handing over the rifle to the Sheriff’s department, and Dickmann said that he enjoyed shooting the rifle in the past but following the shooting at the school he had come to realize that he did not think it was a necessity in either his life or anyone else’s.

Dickmann went on to say that no one outside of law enforcement should have a need to own such a rifle and it was not a tool that found a use for. He said that the definition of a tool was to make work or a job easier and that any job that was legal did not need a firearm to do it. He did say that he had enjoyed owning and shooting it but that he did not need it and said that he does have other types that he can shoot and get the same enjoyment from.

The post to Facebook finished with him taking a stab at the political system in the US as it has failed to pass along with enacting a meaningful gun control reform even though there have been calls for it following each of the mass shootings in the US over the recent years. Dickmann said that if the lawmakers are going to continue to keep their eyes closed and open up their wallets, he would lead by example. Many people have talked about how much money the lawmakers have accepted by way of campaign contributions from the NRA.

The Facebook post of Dickmann arrived during scrutiny that has been heightened of the gun culture in the United States, in schools including Stoneman Douglas and crowded events and public events, such as the shooting that occurred in Las Vegas last year.

On Wednesday the Parkland shooting saw 17 people lose their lives, with 14 of them being students at the school. At the Las Vegas Mandalay Hotel shooting 59 people died and more than 500 were injured.

Dickmann talked about his decision to hand in his gun along with hopes that others would perhaps follow suit and do the same with their weapons. Dickmann said that he had handed over the gun only after doing some soul searching. 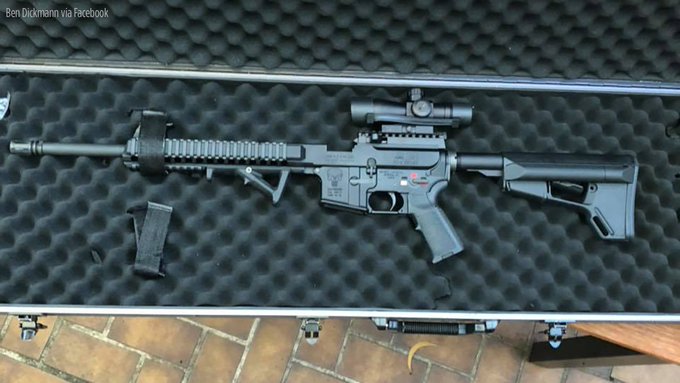 He went on to say that right now everyone is offering prayers and thoughts to those who died and their loved ones, but something else needs to be done. Dickmann said that he thought giving up his rifle was the right thing to do and that perhaps by doing so and highlighting in on Facebook he could bring about a change.